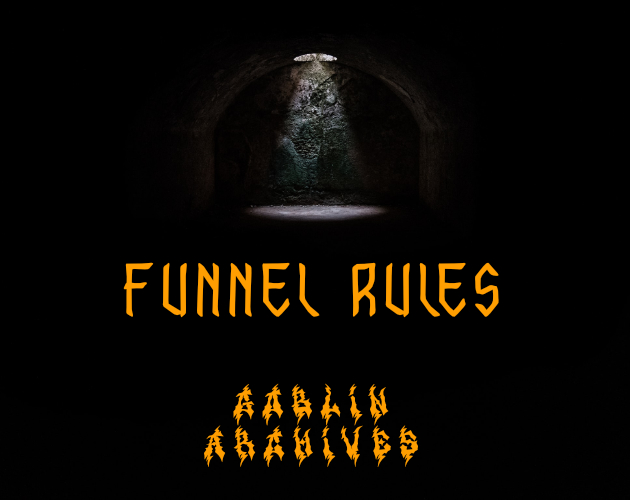 A funnel is often an intro game mode where each player has control of multiple PCs who are often fresh, inexperienced, and squishier then regular Liminal Horror characters. A common aspect of funnels is the spectacular and memorable ways PCs meet their grim ends.

Critical Damage - Death (and dismemberment) in the Funnel

Rule Change: When Funnel PCs take Critical Damage (when damage hits their STR and they fail the resulting save) they die. This is different than the Core rules for Liminal Horror where they are incapacitated.

Death: When a character dies in a Liminal Horror Funnel it should be graphic, big, and memorable. Use the narrative, monster abilities/drives to inform what happens to the DOOMED PC.

Rule Change: When Funnel PCs take Critical Stress and receive Fallout, the PC becomes lost, consumed by the weird abyssal changes of the fallout (they are now an NPC).

Each player creates 3 characters according to the following steps:

The Only PCs Left Alive

After the funnel any surviving characters become full fledged investigators.

The surviving PCs may have higher than normal HP, but that serves as a small reward for surviving the funnel. Players can choose which surviving character (if more than one) they want to play as going forward. Anyone not chosen can be a connection for the PC (Connections - Liminal Horror pg. 8).